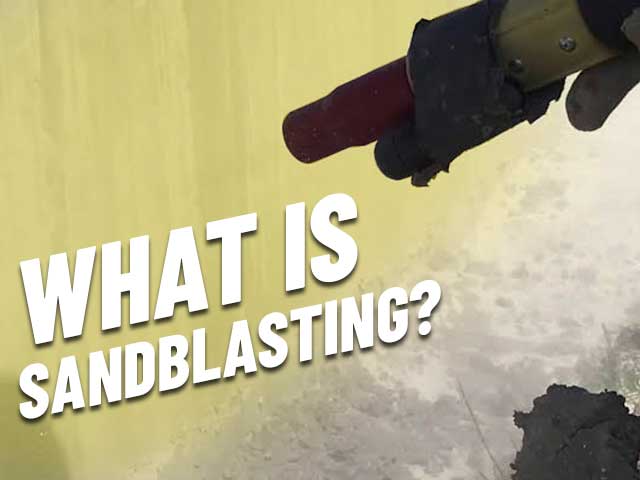 What is sandblasting? Sandblasting is the process to smooth a rough surface or to make a smooth surface rough by abrasion. In some cases, it is also used for cleaning substances that cause surface contamination.

Before answering the question of what is sandblasting, it is necessary to explain how and in which situations this process is performed with which tools. This process, which can be summarized as high pressure spraying of abrasive materials, can be used for wood, metal, glass, concrete and brick. It is used for cleaning dirt and worn paint particles in the pre-paint stage.

The use of the word “sand” for sandblasting process is due to the fact that the material sprayed using high pressure is beach sand, river sand or silica sand. It is true that these materials are commonly used during the sandblasting process. However, it is known that silica sand or other sands are very easily shatterable. Dense dust generated during this disintegration can cause serious lung disorders if inhaled by the operator. Therefore, the use of these substances is prohibited in some countries, such as Australia.

Some of the materials used for sandblasting are as follows:

These substances vary depending on the purpose of the sandblasting process and the industry for which it is intended.

Some sandblasting procedures are as follows:

Wet sandblasting: Materials ranging from plastic to steel can be used for blasting. As it is suitable for materials of different densities and thicknesses, water and soap can be also used for spraying.

Bead blasting: It is made by throwing glass beads onto the surface. It is used for purposes such as making the mortar color lighter and polishing calcium deposits on the surfaces.

Hydro-blasting: Since one of the abrasive materials is not used, it is essentially not an abrasive blasting procedures. This method, also known as water blasting, is more common because it requires only one operator.

As can be seen, many variables should be taken into account when answering the question of what is sandblasting.

The sandblasting machine operates with the help of three elements consisting of spray nozzle, high pressure air and abrasive material. As we said before, these equipment and materials may differ from one industry to another. Cabinets can be used for abrasive blasting as well as robotic systems.

Some of the points to be considered during sandblasting: