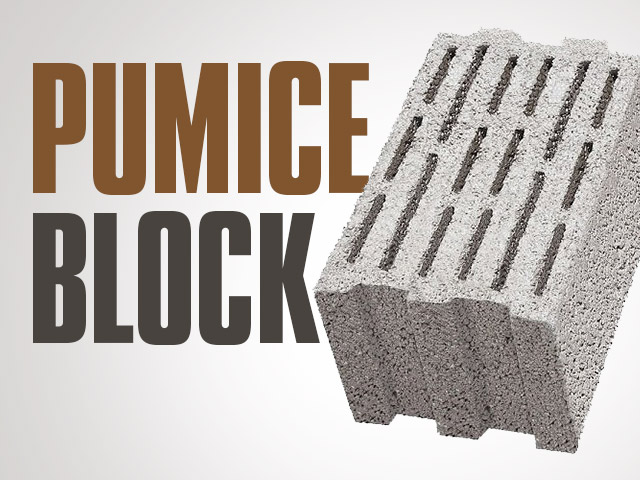 Known as the material used by the Romans 2000 years ago, the pumice block was preferred by the Roman engineers for its durability and permenance. One of the best preserved works of Roman architecture, The Pantheon in Rome is one of the most famous buildings in which pumice blocks are used. In terms of its durability and practicality as a building element, pumice block was obtained with a mortar consisting of hydrated lime cement and fine-grained pumice pellets.The pumice block, which was discovered by the master architects and engineers of that period, has become one of the fixtures of the construction sector. And the production of pumice block is accelerated.

Modern scientists have also determined that the specific weight of the massive concrete dome of Pantheon can be transported by means of a lightweight aggregate containing pumice. The ability of this long-lasting structure to maintain its integrity is also linked to the use of block concretes containing pumice.

What Is a Pumice?

Pumice, which is bims in Turkish, is derived from pumex in Latin, a word meaning foam. Pumice is a volcanic stone composed of eruptions of volcanoes with very high lava.

Pumice is naturally formed of lava particles during volcanic activities, and is the only stone that remains on the surface of the water due to its density. This stone contains a high amount of silica, a small amount of iron and magnesium and is usually included in the rhyolite.

The Advantages of Using Pumice Block

Today’s modern pumice mortars generally consist of pumice stone, sand, pumice and water. Ultra fine pumice powder is also added to this mortar, especially in regular building projects and implementing urban infrastructure brought by urbanization. Pumice concrete blocks are mixed with the mortar of sand and gravel by proportioning at universal standards and then they are printed in various molds.

The advantages of pumice blocks in the construction sector can also be explained by their chemical structure.

Pumice Block as a Light Material

One of the most important advantages of concretes consisting of pumice aggregate is lightness. Its weight is about one third of cement containing sand and gravel, but no pumice material. This feature also provides a great saving in costs due to abrasion of the steel used in buildings consisting of pumice blocks.

Larger and more robust structures can be constructed since there are many support units like beams and pumice concrete plays an important role in reducing the dead load on concrete slabs.

Due to the low thermal conductivity of the pumice, pumice reduces the heat loss in the structures using pumice concrete block to minimum levels.

When pumice-based mortar blocks prepared by the addition of various aggregates (sand, cement, gravel) converted into pumice block, structures can be constructed with the minimization of heat transfer and also prevention or minimization of moisture condensation in the knitted walls and ceilings. Insulated pumice concrete blocks are ideal for many applications, especially for heat-oriented structures.

In addition, pumice concretes have a higher heat resistance than standard concretes. This prevents the fire from spreading to other parts of the structure, even in direct contact with the fire.

Another significant reason why pumice is very much preferred in the construction sector is its ease of nailing, cutting and drilling. Due to its appearance, pumice concrete has a very nice color and texture. Apart from these, pumice stands out with its high degree of architectural acoustic compared to other building elements.

Pumice concrete has superior resistance to weather events such as freezing and flooding. This makes it preferable in very cold climates and weather conditions.

It is also highly elastic against earthquakes or strong wind storms. It is highly resistant to destruction or breakage caused by such natural phenomena.

Furthermore, its superior liquid absorbency (desorption property) enables the chemical interaction between the binders of the pumice aggregate to be strengthened. Water is essential for the stability of chemical reactions between substances in this aggregate. This means better durability and less permeability.