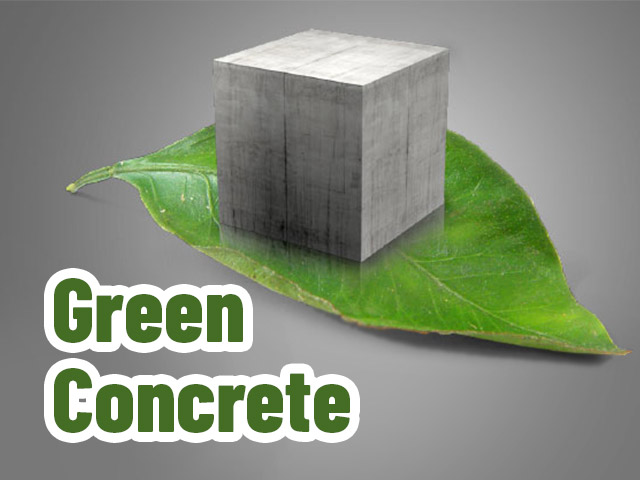 Green concrete may be a word we haven’t started to hear yet. But today, as climate change has become a greater threat, it is already being expressed as a new alternative on Earth. We are at a time when the construction industry accounts for 39% of carbon emissions worldwide. This makes climate change more dangerous. As long as we ignore this situation, we are sure that we will face worse scenarios. However, if we take action soon, we can prevent these disasters and turn our world into a more livable planet. These studies, led by academics, have recently been put into practice.

Green concrete is used for concrete produced from organic concrete waste. This is an important step for a sustainable building industry and a longer life cycle. It not only saves energy, but also reduces carbon dioxide emissions and allows wastewater to be reused. So what is green concrete?

What is Green Concrete?

Green concrete, a revolutionary invention in the concrete industry, was discovered in Denmark in 1998. It aims to create a recycled concrete industry by using waste materials such as slag, power plant wastes, mineral wastes, glass wastes, sawdust wastes in concrete production. Thus, this understanding aims to minimize the environmental impact of concrete. For this purpose, a new technology has been developed considering all the requirements, production processes and performance of a reinforced concrete structure. This includes the detailed calculation of the strength of the concrete to be produced, its fire resistance and its relationship with all environmental factors.

With the spread of green concrete structures, carbon dioxide emissions are expected to decrease by at least thirty percent. We use more than 4 billion tons of concrete every year. In 2016, worldwide concrete production emitted 2.2 billion tons of carbon dioxide into the Earth’s atmosphere, accounting for 8% of the world’s total CO2 emissions. It may not seem like that much, but this information from an article puts the number in perspective. For this reason, it will be more profitable for the concrete industry to use its own waste products among the mentioned ideas. It can be said that experts draw a very positive picture regarding the advantages of green concrete.

As mentioned earlier, the most important effect of green concrete is that it minimizes the negative environmental impact and enables us to make more optimistic conclusions for the future. Of course, the only useful point is not to be environmentally friendly. Conventional concrete has other advantages that will shake its place in the construction industry. Some of these can be listed as follows:

The concrete industry will increase waste product use and recycling by twenty percent.

Green concrete will have much better processing work than traditional concrete products.

Due to its high thermal resistance, it will increase the safety level in situations such as fire.

It will be no different from conventional concrete in terms of resistance to water pressure.

It will be at the same level as conventional concrete in terms of resistance to bending.

It creates additional costs as it needs to be supported with stainless steel.

Structures built with green concrete have a shorter lifespan than those built with conventional concrete.

Green concrete technology does not yet have many common uses in industry. For this reason, the product needs to be more practical and supported in order to be developed. This will pave the way for studies that can prevent their disadvantages.

The main component of concrete consists of cement and limestone. During cement production, temperatures close to 800-1000C are applied to the components. The reason for this is to remove carbon dioxide. During this process, approximately 900 gr. carbon dioxide emissions occur. Therefore, green concrete is used in order not to pollute the atmosphere and to reduce carbon dioxide emissions. One of the most important reasons is recycling. To put it in a more descriptive language, while normal concrete can stay in nature for years, green concrete can be recycled and used in other projects. For example, it is used in road construction, building construction, bridge construction, sidewalks, and architectures where all the raw materials you can think of are concrete.