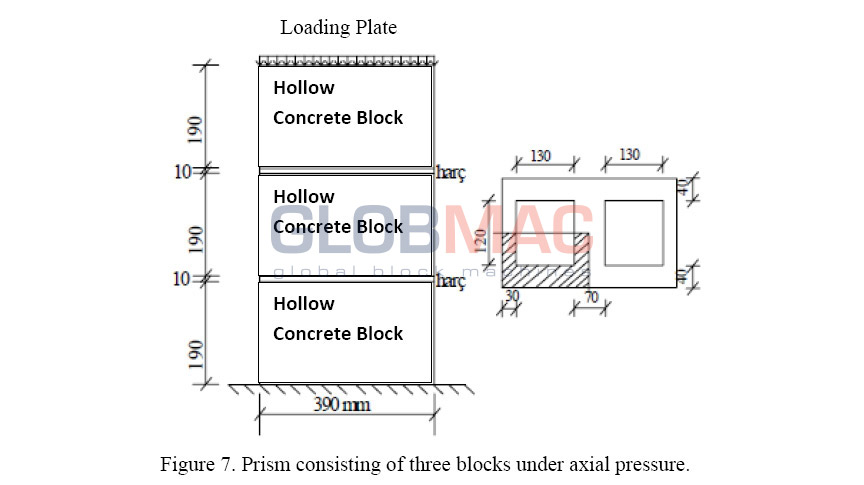 Ramamurthy and Khalaf conducted experiments to determine the overlap knitted pile pressure resistance. In this experiment, two masonry units and masonry units placed on top of three different mukavemetteki with mortar made of brick and hollow. LUSAS finite element method, the samples used in the experiments program using symmetry in some quarters for the union is modeled as a three-dimensional (Figure 7)

Finite Element Analysis of Concrete Hollow Block Masonry Prisms under Axial Compression
Finite element model used in the experiments, the load properly distributed and the sample from top to prevent horizontal movement of the loading plate, lateral movement, keeping the top of the sample were represented. Prism made of blocks of 400×200 mm in size according to ASTM E 447’ye plate for the installation must be a minimum thickness of 51 mm. As mentioned above, the experimental results in the literature and three-dimensional model of the Drucker-Prager yield criterion test specimens LUSAS program, according to the analysis can be made of plastic, the material parameters cohesion c, and internal friction angle φ, the values of data should be provided. These values are entered as initially estimated and the model is not known as a net made of plastic analysis. The plastic analysis result, the experimental results of the model that are enough to approximate values of c and φ are determined. In this process, the experimental results in the literature with different block and mortar strength test results of the test samples and each time approached for the repeated condition c and φ values were determined. As a result of the analysis in this plastic, with the c and φ values to investigate the relationship between the block and the mortar strength is derived from the following equations.