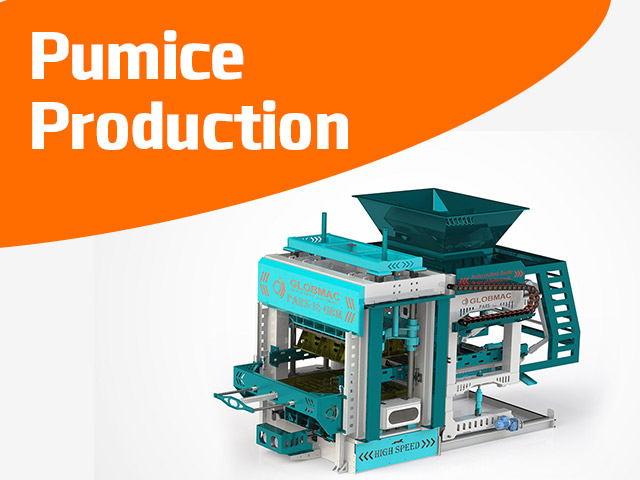 Pumice production is produced to obtain the pumice briquette, which is used for heat and sound insulation in the construction industry. Its raw material is pumice stone. It is the raw material formed as a result of volcanism. It has a crystalline, spongy and porous structure. It is a material resistant to physical and chemical factors.

The raw material used for pumice production is extracted in the Central and Eastern Anatolian Regions of our country. The pumice stone mined in Turkey has a high level of compliance with world standards.

What is Pumice Production?

Pumice is a sponge-like, disconnected, hollow, silicate-based volcanic material. It is especially used for heat and sound insulation. It is known that it has been used more frequently in recent years due to its advantageous in terms of mass weight. Due to the techniques used in the production phase, it is considered as a safe material due to its robust structure.

Natural stone, which is frequently used in international industrial areas, is an industrial raw material of volcanic origin. It has started to be used in other industrial areas, especially in the construction sector. We see it in the natural structures in the Cappadocia region and in the structures that we encounter in the Nevşehir and Niğde regions.

Its first use in the construction industry dates back to the Roman period. It is seen that this material was also used in the dome of Hagia Sophia. It is used in many parts of the world, especially in countries such as Germany, France, Italy, Sweden, America and Japan. In order to provide sound and heat insulation, pumice products have been used for more than a century with their superior insulation properties, lightness and earthquake resistance.

Pumice machine is a machine specially used to produce various pumice blocks. It can be used to make blocks of various features and sizes by changing different molds. Production machines with three different features are available. These;

Pumice blocks, which are used in many construction sectors today, have many advantages. The durable structure and longevity of the structures made of pumice stone are the reasons why it is preferred. If you wish, let us share its advantages with you;

One of the most important advantages of pumice-made materials is their lightness. It is almost half as light as a concrete made from sand and gravel. This is a very important material for reducing a large load, considering the steel used in the construction of the structure.

It minimizes heat loss thanks to its low thermal conductivity. In addition, it is almost impossible for moisture to form in the ceiling and wall sections used. In terms of cost, it is preferred because it is cheaper than other insulation materials.

It has a higher fire resistance than concrete. Due to its non-flammable structure, its durability is high even in intense fire.

It is a material that you can easily perform cutting, drilling and nailing operations. For this reason, briquette material is mostly used in the construction structures used.

It is not affected by low temperatures and high temperatures. Therefore, its resistance to harsh weather conditions is one of its advantages. Because of its higher durability than concrete, its use in disaster areas is more common.

Pumice machine models have different production capacities. Old model pumice machines were generally manual and had low production capacity. However, today, semi-automatic and fully automatic pumice machine models have been developed. In this way, it became possible to produce more briquettes in a certain period of time. Briquette machine prices may also vary according to these features. You can contact Globmac for different prices and machine options. All the briquette and concrete parquet machine models you need are provided by Globmac. You can reach us from the contact addresses to learn the model and price list.